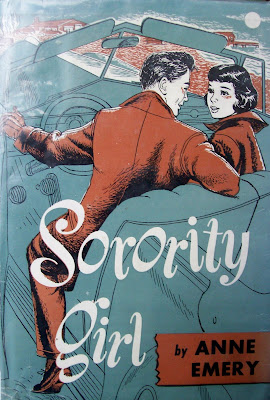 She had always been aware of the Nightingales. The Nightingales and the Amigas were two highly exclusive girls' organizations whose membership comprised about ten per cent of the girls in the school, by special and coveted invitation. The "best girls" belonged to one or the other, the girls with the pretty complexions, the smart clothes, the lovely hair - the successfully glamorous girls who dated the outstanding boys. Jean had always been aware of them, with the resentment of the outsider toward the clique, mixed with a kind of helpless envy.


Jean Burnaby is a junior in now, and determined to make a mark. She starts the school year intending to 'have lots of activities, make many new friends and gain recognition for achievement.' Instead, she loses herself in a sorority. At Sherwood, secret societies are banned - but the Nightingales and the Amigas fly under the radar by posing as charitable organizations. Of course, they are anything but - they're exclusive private clubs that exist for the joy of separating the sheep from the goats. Jean soon discovers that the privilege of being a sheep and included in the realm of the popular girls comes at a price - she's shunned from other organizations, loses a class election, and is treated with wary dislike by her fellow classmates. Isolated from non-sorority members, she finds the Nightingales increasingly annoying as well. And the boy she truly likes, Jeff, isn't a member of the corresponding fraternity. But to be in this group is to be branded "the best" and how can she give that up?

Another tale of a sensible girl having her head turned by sudden popularity, and the price of that popularity. Interestingly, although there are a few things Jean dislikes about the sorority - the girls will drink beer, their parties can be a little too much for her, their casual dismissal of others - the book doesn't really make a case that the sorority sisters are themselves bad or behaving very badly, but that the sorority system is simply flawed. Over the course of the year, Jean just becomes too uncomfortable with the calculated hypocrisy of a service organization ostrasizing people, and the level of artifice.

The writing is very strong, with excellent descriptions, powerful characters and sense of place.

Before the hall mirror she brushed her hair again and arranged her lipstick with critical fingers. She found her notebook and pencil and pen, looked down at her plaid gingham dres, wishing it were cool enough to wear a new fall outfit, and let herself out the big front door.

Jean makes a heroine who's appealing and yet realistically somewhat unlikeable at times.

I didn't realize there were high school frats and sororities, but apparently...

Author Bio
1907-1987
Anne Eleanor McGuigan was the eldest of five children with a father who was a professor. She graduated from in 1928, spent a year travellign with her family, and then began teaching. She married John Emery in 1933, and had five children. The town of appears to be the model for Sherwood; she lived in most of her life. 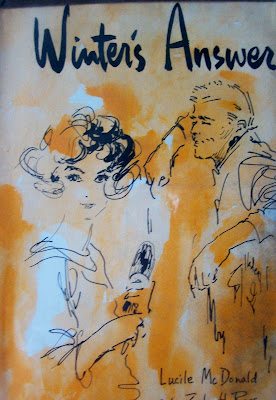 
"You're so poised, so sure of yourself," one of her sorority sisters had told her admiringly.

Would-be journalist Kit Langford is confident and ambitious, but her first taste of failure hits her badly when she transfers from a small college to a larger one and her writing and managerial talents aren't instantly recognized. Angry and humiliated, Kit takes comfort in winning a short internship at a magazine over the Christmas break, vowing to win a job there and never return to college. When that plan fails horribly, Kit runs again, joining her cousin Diane on a trip to , where Diane is to rejoin her new husband, Jack.

But things don't go as planned in either. Jack is in a coma after a car accident. Diane, frantic, spends every moment at his bedside while Kit hunts for a job to support them and the elderly boat Jack had bought as a re-sale project and temporary home. Kit is rejected over and over, first from the newspaper jobs she covets and then, lacking experience, even from menial labor positions. Desperate, she becomes the world's least apt waitress as a greasy spoon, on her feet from to every day.

Kit grinned. She had left Northern expecting to conquer the world. Now she was afraid she could not even keep a menial job.

A depressed Kit bounces back quickly with attention from Paul, the handsome rich boy on the next boat over, and his low-key pal Red. She also finds satisfaction in refitting the Matilda, scrubbing, refurbishing and decorating the old boat in hopes of finding a buyer.

The book lacks a strong sense of place; and both get the most cursory treatments, although fares slightly better. But the character of Kit is very strong and vivid. Her flaws are as compelling as her strengths, and she's a very appealingly resourceful protagonist, navigating her way around a strange place and reluctantly taking charge of the practical problems of Jack's illness. Her youthful encounter with reality is as painfully realistic today, in essence, though the details have changed (she limits her newspaper search to the women's page, after all). And in some ways, she's more realistic than a modern heroine would likely be - her worries about her clothes and their suitability would not occur to most modern YA heroines - yet is realistic. And yes, there is some clothing porn here:

The two-piece shantung ensemble was a gay print of blurred rose. It was perfect with Kit's dark hair and gray eyes. She could see herself marching confidently into a newspaper office. Wearing the jacket, she would look business-like; on removing it,she had a dine-and-dance dress

Paul's discomfort with working sounds odd, and the near-universal dismissal of Kit's efforts with the boat seem harsh. Red distinguishes himself (and feeds my old theory about boys named Red in fiction) by being the only one who mentions that it was pretty lucky for Diane that Kit came to Florida, and by admiring her work on the Matilda.

She thought back to the moment when she had dressed for her first day at Young Modern. Her confidence of two weeks ago was gone. It had been peeled from her by the failure of her dream, the shock of Jack's accident, Mr. Forbes' attitude, the rejection by the employment agency, the realization of her own shortcomings.

Kit loses her boundless confidence and discovers how hard it is to even just earn a living, let alone succeed. It's implied that this will make her a better person and more successful, that a knowledge of her own flaws will strengthen her for the career ahead. I have my doubts. True, Paul's example is convincing - a well-off boy who's never had to struggle and doesn't accept that he ever should have to work hard - but there's such a thing as having the confidence dented, not knocked back a few steps. Kit's so arrogant at the start that she can stand some knocks; others might have folded tents and been destroyed by what only serves to strengthen her. While the moral to this story might be similar to a fairy tale - be humble and work hard - I take from it that it's all luck. The right temperament in the right place at the right time...

Lucile Saunders McDonald
1898-1992
Graduated from the University of Oregon in 1923
Freelance journalist who worked for the Seattle Times Magazine
Lived in Washington State most of her life, and was very interested in its history
Wrote or co-wrote nearly 30 books