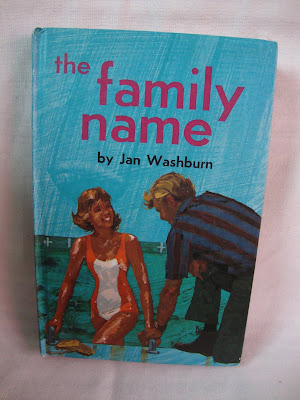 And there was nothing left for me, she thought gloomily.

Kathryn Drews is 17 and living in Coral Grove, Florida.  Her odd nickname "Ryndy" arose because her mother is also Kathryn and has already snagged the normal shortening "Kathy" for herself, an early sign of Ryndy's major hang-up - she is the youngest of 4 sisters and feels like she got the very short end of the stick.  The other 3 have already snagged such family/social positions as "the pretty one (Vicky - green-eyed strawberry-blonde), "the smart one" (Virignia/Ginny - currently working on her doctorate in atomic research), and "the popular one" (Val, a little, peppy cheerleader captain who sings, plays guitar and wins votes).  Ryndy, laboring along as a grade-C student with lines where Vicky had curves, has pinned her hopes on chasing one of Val's accomplishments - cheerleading.

It's now or never, she thought grimly.  I've got to make the cheerleading squad.

Somewhat miraculously, Ryndy does make the squad.  And longed-for pretty boy Brad notices her.  And she gets to sit at the very special popular kids' lunch table.  And you know this is going nowhere good.

Ryndy and co. live in Florida.  Shortly after the spring-time tryouts that determine Ryndy's role on the cheerleading team the next school year, she and BFF are water-skiing when an accident sends Ryndy flying.  She breaks both legs, badly, and ends up sitting out the summer and then into the fall.  Desolate, she falls into a sulk that only her best friend's dogged determination and a sullen boy's nagging can drive away.

She was just an arm's length from him now.  She recognized the broad shoulders and the crop of white-blond hair. She had never met Dirk Hudson, but she knew the other football players called him "The Dutchman."

Dirk is mysteriously nasty to Ryndy, who promptly forgives him when they meet again.  And then he's mysteriously nasty to her again.  In what would seem to bode ill for Ryndy, she again promptly forgives him because he has an awesome reason.  Ish.  Awesomeish.  Okay, not awesome, just  a reason.  Because the best way to save a girl from a cad is to be a surly jerk to her yourself.  Long literary tradition of that NOT WORKING, Dirk.

Also, I just re-watched Bridget Jones which once again showed that boys need to SHARE their knowledge of bad boy's evildoing with girls or the girls just have no idea WTH he's so surly about and go running to the bad boy for comfort.  And the fight scene.

So, Ryndy, Dirk, hospitalized tots (oh, backstory, Ryndy's otherwise-never-mentioned church has a youth group which visits hospitalized children and Ryndy becomes entangled with a sad tot who's been stuck in the pediatric ward for months.  Named Pieter.  Is it sad that I didn't see the Pieter/Dirk-the-Dutchman connection coming?  It's sad, isn't it?

It all works out.  Ryndy decides that she's really more of a swimmer than a cheerleader, sis Val confesses to envying her swimming prowess, and Dirk stops being mysteriously nasty now that his Great Dark Secrets are revealed.  For now.

Well written, with a heroine who's realistic and believable.

About the Author
Janice "Jan" Louise Prince was born in Brockton, MA in 1926. She earned an English degree from Bates College in Maine in 1947, married John Roger Washburn and became a German and English teacher in Florida.   Later, she worked her way up from an entry-level job to VP of Human Resources at Southeast Bank.  She died in April 2017 at the age of 90.

This was Washburn's first book, written while she was a high school teacher in Fort Lauderdale, where her husband was a swim coach and all three of their children swam competitively.   She wrote two more teen novels, The Secret of The Spanish Treasure (1979) and Finder's Keepers/Sweet Dreams #213 (1994).  She also wrote adult fiction More Than Great Riches (2009).

An interesting fact mentioned in her obituary was that she translated reparations documents for Holocaust victims early in her career.